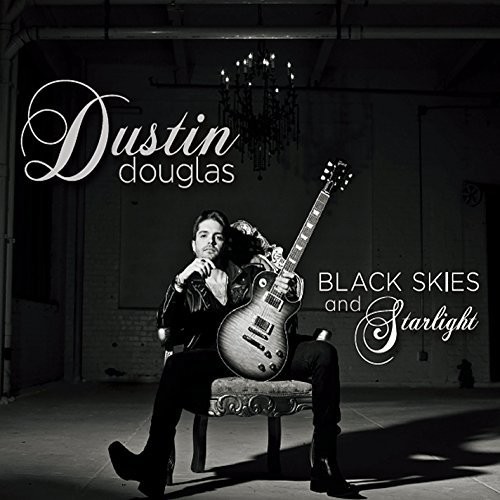 Though the current state of the music industry finds itself littered with thousands of artists that, for the most part, could easily be placed into one particular category or genre, the rarest of all just might be rock and roll. Pounding drums. A driving bass. Scorching guitars. Powerful vocals. Meaningful songs. They are the ingredients that laid the foundation for some of the greatest rock bands of all-time, and though you'd be hard pressed to find too many young artists with those qualities on your radio dial today, they are still out there. And when one does come along, it can still hit you like a ton a bricks. Enter Dustin Douglas. The explosive, vibrant and polished Pennsylvania-based singer/songwriter/guitarist has all of those ingredients. And more. And on his debut CD, "Black Skies and Starlight," he flexes his musical muscle with both power and grace. "This music is a mix of big guitars, with pop-laced hooks and an alternative attitude," says Douglas, who performs with his band, Dustin Douglas & The Electric Gentleman. "And the live show can sometimes even have a bit of a jam element to it, because we're not scared to go off and do our thing." Douglas, though only 28, is veteran of the Northeastern Pennsylvania music scene, which has produced national acts such as modern-rockers Breaking Benjamin and roots-rockers The Badlees. He began wowing audiences when he was only 12 with his virtuoso playing, gripping vocals and onstage charisma. His previous project, Lemongelli, released two critically acclaimed albums and Douglas also spent five years performing and recording with The Badlees. His debut CD was produced by Bret Alexander (The Badlees/Breaking Benjamin) and he names Jack White, Dave Grohl, The Beatles, Josh Homme, Gary Clark Jr., Led Zeppelin, Jimi Henrix and Elvis Presley as influences. He says this is the record he's always longed to make. "For me, this was all about the songs," says Douglas. "The songwriting was the most important part. For me, I wanted to be known for more than just a guitar solo. And with this record, a catchy chorus was just as or even more important than a guitar tone. Lyrically, it's a lot more biographical than anything I've done before. I'm putting myself out there, but I think everybody can relate to the songs."