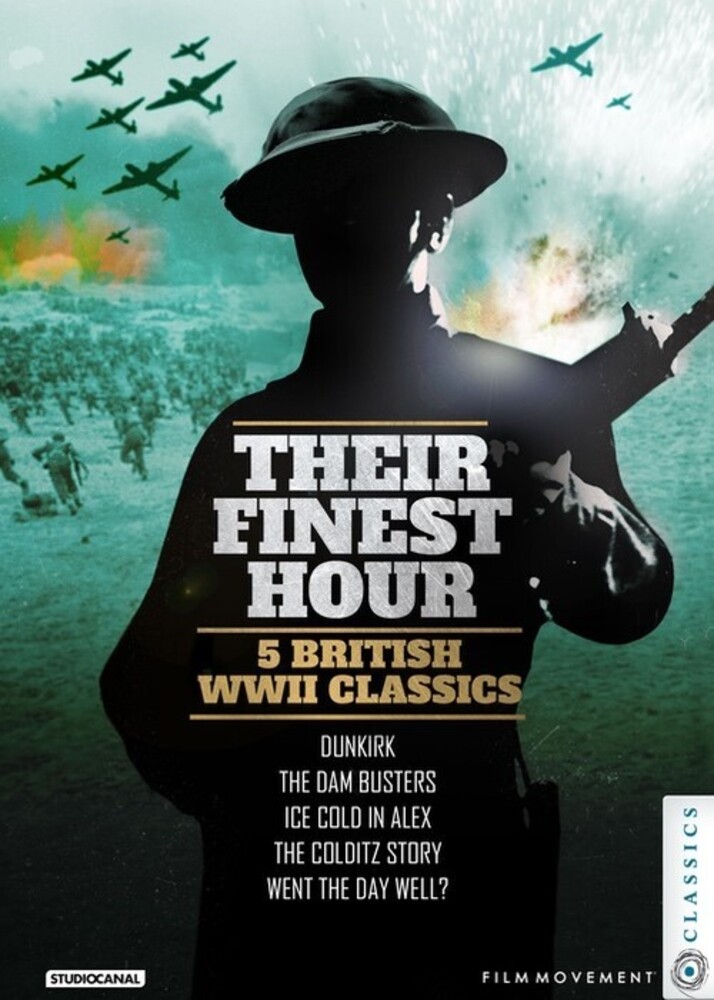 Their Finest Hour: 5 British WWII Classics is the seminal 5-disc box set of classic British war films, restored in HD and released for the first time ever on Blu Ray in North America. Went The Day Well:Bramley End, snug and safe, seemed far away from the events of World War II. Little did the villagers suspect the grim events which were impending. They were surprised, but welcomed the lorry loads of Royal Engineers that rolled onto their village green. They had no reason to suspect that the soldiers were disguised German parachutists, and even less reason to mistrust the leader of their little community, Oliver Winsford.The Colditz Story:The Germans believed that no man could escape from Colditz Castle, set as it was in the heart of the Reich, 400 miles from any neutral frontier. This film, based on Pat Reid's epic novel, tells the story of how the British, French, Dutch and Polish prisoners of war who were incarcerated in Colditz set out to prove their captors wrong.The Dam Busters:An epic war story of World War II. Scientist Dr. Barnes Wallis believes World War II can be shortened by destroying the Ruhr dams, thus paralyzing the enemy's industrial nerve center. In spite of the difficulties caused by the critical situation at the time, he works steadily to perfect a special bomb of his own invention for the purpose. Air Ace Wing Commander Guy Gibson is chosen to form, train and lead the hand-picked squadron. Flying at tree-top level they cross the Rhine and attack the first dam - Moehne. The bombers seem unable to maintain the accuracy essential for success - then suddenly the masonry begins to crumble.Dunkirk:It is early May: the year 1940. In London, the civil population, lulled into an atmosphere of false security, goes about it's business as usual. Even the official war communiqué's merely report activity on the Front. But Charles Forman, war correspondent, knows better. As the war in France takes a turn for the worse, he signs on with the Merchant Navy and volunteers for the greatest mission ever mounted... The evacuation of Dunkirk.Ice Cold In Alex:A thousand square miles of blazing, pitiless desert, and a story so unusual, so gripping that it could spring only from life itself. The Mediterranean of 1942; along the barren North African coast where war has turned towns into smoking ruins, and the grim struggle surges to and fro. But that is just the background; the story is about people, not war - and it happens to be true.