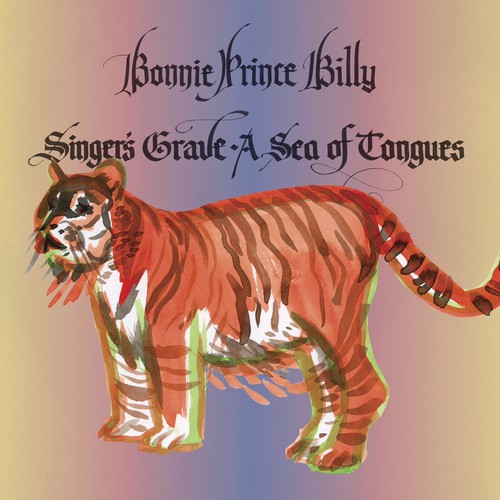 Singer's Grave a Sea of Tongues is the 11th new full-length album from the mind, soul and voice of the man that is Bonnie 'Prince' Billy. His first solo record on Drag City in nearly three years, it is a rich and roiling time of life that is captured in a myriad of moments throughout all the songs here. There are many roads into Singer's Grave and Bonny stands at the crossroads of them all.

With every album that he makes, the Prince sees an increasing number of visions coming to greet him at the old intersection: possible pasts and futures, each radiating like a mirage in the heat. Today, there are five corners that Bonny stands at; each bringing business old and new to town, creating two trilogies that overlap and enmesh with their divergent intentions. Singer s Grave a Sea of Tongues began when Bonny s old production collaborator Mark Nevers got in touch with unfinished thoughts in his mind. The work that they d begun with Master and Everyone and Lie Down in the Light was incomplete. A third chapter was needed, traveling further upon their previous path through acoustic sound and the hues of its dark and lightness. Bonny agreed in principle; a new chapter seemed right but for him, the trilogy that Singer s Grave a Sea of Tongues would complete wound back through the songs and singing of Master and Everyone and rooted in the murky depths of Palace Brothers Days In the Wake! Throughout Singer s Grave a Sea of Tongues, mythos is in the wind, trysting with truth and the joys of song, of singing and playing in open space; harmonies and acoustic instruments spread in bright stereo sound, accosting in the air between the speakers and going deep, without hesitation into our waiting and needing minds and souls. Bonnie Prince Billy sings for who he was, is and will be, and for all of us in time. Singer s Grave a Sea Of Tongues was recorded in Nashville by Mark Nevers and played by Bonny, with Emmett Kelley, Ben Martin and Paul Oldham. Additional instrumental contributions were made by Richard Bailey, Billy Contreras, Tony Crow, Jedd Hughes, Paul Niehaus and Chris Scruggs; additional voices provided by Caroline Peyton and by Alfreda McCrary-Lee, Regina McCrary and Ann McCrary, singing together.