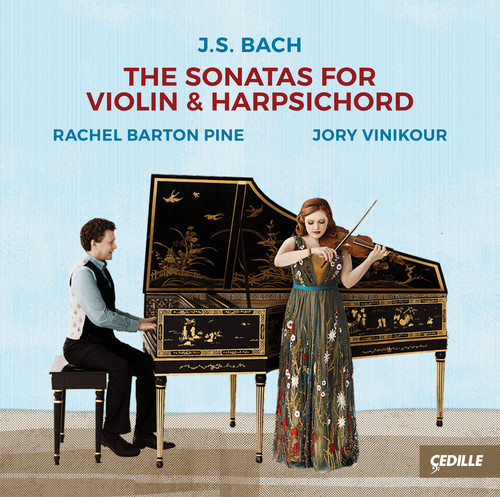 Violinist Rachel Barton Pine and harpsichordist Jory Vinikour, critically acclaimed artists of interntional renown- and also close friends- record together for the first time on this album of Johann Sebastian Bach's complete sonatas for violin and harpsichord. The artists approach these works as Bach intended: as trio sonatas with equally important roles for the violin and the harpsichord's treble and bass lines. In addition to the six Sonatas, the album offers the remarkable and ravishingly poetic Cantabile, BWV 1019a, a free-standing work that Bach originally conceived as a movement of the Sonata, BWV 1019. Cedille's audiophile engineering and the intimate acoustics of Evanston, Illinois's Nichols Hall allow the complex trio textures to blossom with detail. In all, the album sets a new standard for a body of work that Bach's son, CPE, considered among his father's finest compositions. Rachel Barton Pine is a Billboard chart-topping artist. Her 2016 album 'Testament,' comprising JS Bach's Sonatas and Partitas for solo violin entered the Billboard Classical Chart in the No. 1 position, as did her 2013 Cedille album 'Violin Lullabies.' Making his Cedille label debut, Vinikour received Grammy Award nominations in the category of Best Solo Instrumental Recording for his 2013 album of modern American music for harpsichord and his 2012 release of Rameau's complete harpsichord works.