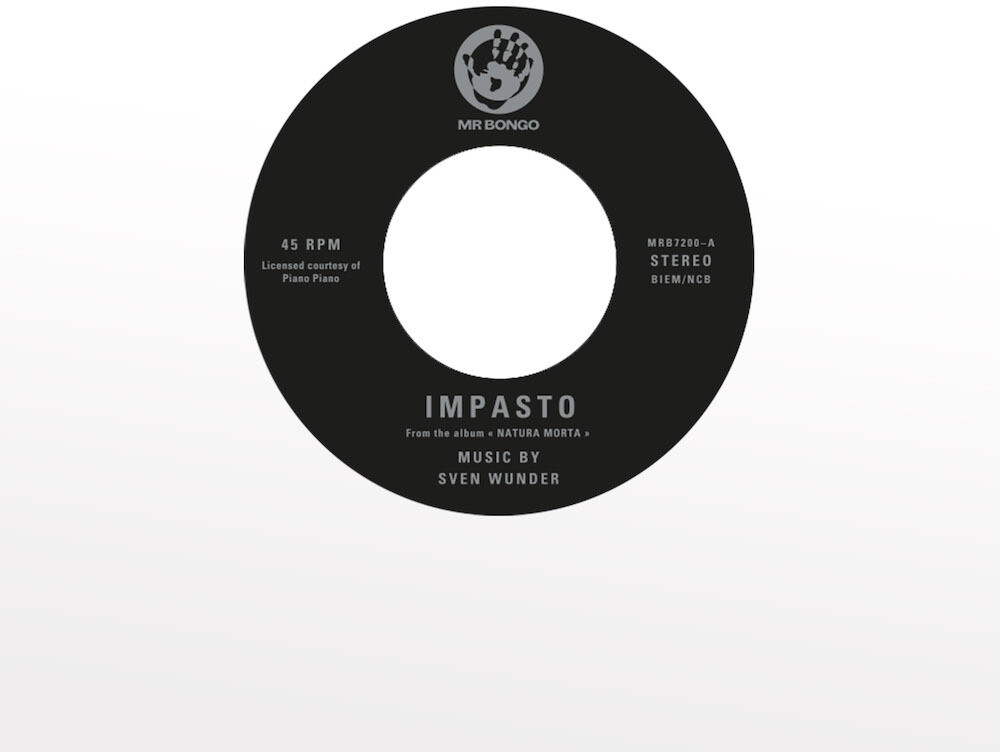 In collaboration with Piano Piano Records, Mr Bongo is thrilled to present a taster 7" single, 'Impasto' / 'Prussian Blue'. The single showcases the colourful palette of Sven Wunder's fabulous forthcoming third album 'Natura Morta'. The album is set to be released on Piano Piano Records later in 2021 with this 7" acting as the perfect prelude.Sven's 2019 album 'Eastern Flowers' took us into the world of Anatolian rock, European jazz, library, funk, psychedelia, and traditional folk melodies. The 2020 follow up, 'Wabi Sabi', mixed jazz and Eastern and Southern Asian sounds to present an aural aesthetic of the Japanese ancient wisdom. 'Natura Morta', "still life" in Italian, owes it's inspiration to art. Sven Wunder explores it as a bridge between nature and the human ability to judge and observe through eleven unique musical compositions, each one brightly coloured and textured with an emphasis on vibrant melodies.As with previous Sven Wunder material the tracks here on this 7" are covered in lush orchestration, evoking the rich musical soundscapes of a previous era (think library music or the film scores of Morricone). First up is the beautiful 'Impasto', which refers to the technique used in painting where the paint is laid in very thick layers on a surface. With it's lavish sweeping strings and melodies there are echoes of the arrangements of Arthur Verocai, but it then takes a turn into 60s detective movie territory. You can imagine it being the score to a scene in a Harry Palmer film which breaks for a romantic interlude in between the action and suspense. 'Prussian Blue', is built on Sven's 'Shinrinyoku' from the 'Wabi Sabi' album, sharing the same melody but here with an uptempo beat and another arrangement. It begins with a moment of calm with it's soothing piano intro before it bursts into a percussive breakbeat workout. It skates and glides with the influences of Italian library music and Eastern melodies, yet at the same time it retains a unique element that can only be Sven Wunder. 'Prussian Blue' refers to the pigment that was imported to Japan.Once again, we are indebted to Sven Wunder and John Henriksson at Piano Piano Records for letting us share this melodious vision from one of our favourite contemporary musicians. The compositions on this 7" were produced with financial support from the Swedish Arts Council.- Taster 7" from Sven Wunder's forthcoming 3rd album.- Reminiscent of the legendary film scores of Morricone and the beautiful arrangements of Arthur Verocai.