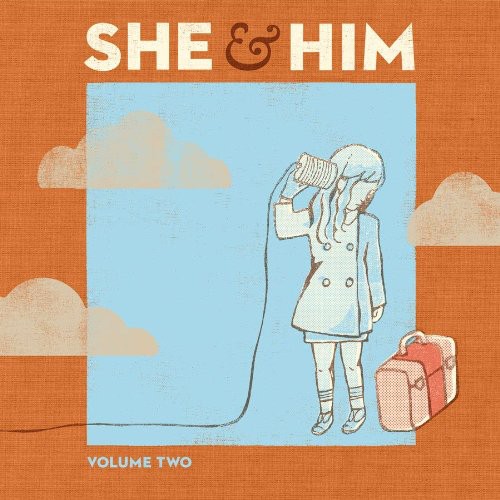 What began as a fascinating, no-strings-attached collaboration on 2008's Volume One has evolved into a bona fide touring band and She & Him are here to stay. Zooey Deschanel and Matt Ward are a comfortable and complementary musical pair; hearing them again on Volume Two feels like getting together with two old friends. This time the harmonies have grown more angelically layered, the string arrangements more dramatic, the songwriting even sharper and more confident. All songs (except 4 and 7) written by Zooey Deschanel. Produced by M. Ward.

''Volume Two'' is the second studio album by She & Him, a collaboration between M. Ward and actress Zooey Deschanel. It was released on March 17, 2010 through P-Vine Records in Japan, in the United States on March 23, 2010 through Merge Records, and on April 5, 2010 on Double Six Records in the UK.

On 9 February 2010, She & Him were interviewed on BBC 6 Music and performed "Thieves" and "Gonna Get Along without You Now" from the not-yet-released album. Two versions of the song "Thieves" were made available on-line. One was that played for the BBC interview and two weeks later Stereogum premiered the studio version from the album. A video of "Thieves" was released on July 9, 2010.

On 14 March 2010, the entire album became available for streaming on NPR's website. The album debuted at number six on the ''Billboard 200'' chart. - Wikipedia