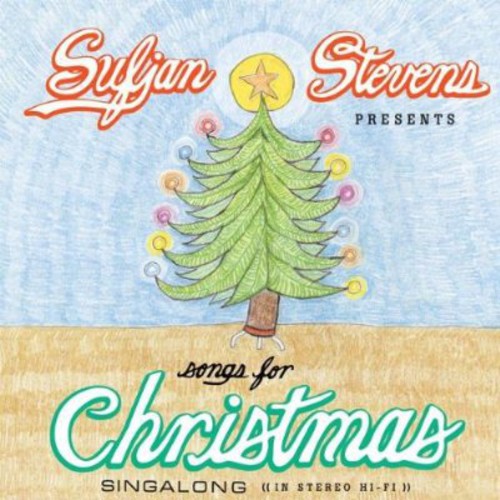 In December 2001, Sufjan set out to create a Christmas gift for his friends and family. The result was a seven-song recording that he called NOEL VOL 1. Over the next several years, he created new EPs to add to the collection. This 5-CD box set includes all five volumes.

This guy has taken to sporting enormous angel wings in concert, but it's unclear as to whether that's a Halloween or Christmas thing. Hopefully there's somebody special in his life to keep him away from the top of the Rockefeller Center evergreen. Anyway, in case you've asked your IT to block Pitchfork's site until the next Radiohead album comes out, Sufjan is that quirky, hyper-literate Detroiter who's made a (we think) tongue-in-cheek vow to write concept albums about all 50 states, and as of press time has a scant 48 to go. His bio is disturbing in its litany of all the instruments he can play and pastimes he enjoys, most of the latter being (we hope) facetious. For four of the last five years, Stevens has rush-recorded predictably eclectic Christmas EPs with friends, and this is the compilation of those previously not-readily-available songs. So you get five EPs worth of covers with stickers, short stories, a Christmas essay by Rick Moody, a songbook, chord charts (!) and other goodies for a not-offensive-at-all piece of paper with Andrew Jackson's visage. The holidays just got so gosh-darn hip! The indie world may be waiting with bated breath to learn which state prolific soloist Sufjan Stevens will devote an entire album to next, but the joke's on them: it's obviously the state of the Christmas spirit! Over the last five years, Stevens and crew have been rocking handmade yuletide EPs for family and friends, and this box set compiles them all for you. Our man allegedly is fascinated with the dichotomy of the ideal of Christmas versus the grody capitalist reality, reflected in the hymns and traditional songs covered here. Unfortunately, he won't be tending to his sleigh and dropping Songs for Christmas down our chimneys on Dec. 24. The set will retail for an (affordable) $21.99.