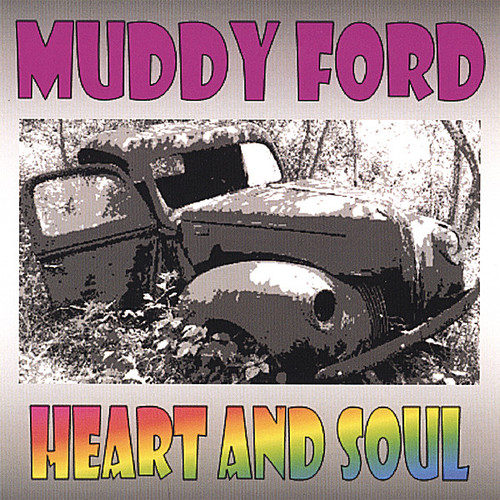 Muddy Ford - THE GREENVILLE NEWS Posted Wednesday, September 28, 2005 - 6:00 am By Donna Isbell Walker ENTERTAINMENT WRITER If you're born with a rock 'n' roll heart, all the regimentation of life in the real world won't alter it's rhythm. A suit and tie, a house in suburbia, a successful career -- those things don't matter. That heartbeat surges in the presence of a searing guitar riff or a potent drum solo. The four members of Greenville rock band Muddy Ford still feel that distinctive cadence. By day, they're businessmen in their 40s and 50s, in fields like engineering and insurance, with wives and kids and nice houses. But one recent night, they were holed up in James Cantrell's basement, tearing up ZZ Top's 'Waitin' for the Bus.' 'Have mercy,' Cantrell wailed, his face contorted and his guitar screaming in response, while drummer Frank Hopkins kept the backbeat going in the corner. They're a long way from their day jobs, even though it's only been an hour or two since they got off work. Most of them are still wearing their dress pants and nicely pressed shirts from work, a far cry from the de facto rock band rehearsal uniform of faded T-shirts and frayed jeans. The band was rehearsing for Thursday's season-closing performance at Pendleton West Downtown Alive. Muddy Ford has performed at Barley's and the Handlebar and at a number of private parties in the two years since it formed. They're also working on a full-length CD, recording it on equipment in Cantrell's basement. The members of Muddy Ford, who named the band after a street in Cantrell's neighborhood, don't expect to be the next Rolling Stones; they're just happy to indulge their passion. 'We have day jobs to support our habit,' Cantrell said. The money they might make from music isn't paramount anyway, they say. 'We play for free, but we get paid to set up and tear down the equipment,' Hopkins said. In addition to Cantrell and Hopkins, Muddy Ford features Kirk Goeldner on keyboards and backing vocals, and Bob Addis on bass. Cantrell and Addis are engineers; Goeldner is an insurance executive and past chairman of the Metropolitan Arts Council, while Hopkins is a construction director for Fluor Daniel. Three of the men played in rock bands in their youth, with all the starry-eyed dreams that young rockers have. 'I would still be doing it if I could,' Addis said. Goeldner came to play music by a slightly different route. When he was a college student near Chicago, he found an upright piano on the curb on trash pickup day, and he dragged it home. The piano stayed in the garage, and Goeldner taught himself to play a little. After college, he took a decades-long break from music, but stuck a toe back into it's seductive waters a year or so ago, when he started jamming with the company band at Canal Insurance, where he is CEO. Goeldner is Muddy Ford's newest member, joining up earlier this year. Cantrell's basement in a tree-lined Eastside neighborhood illustrates the dichotomy of their lives. Enter through the sliding glass door, and you'll find lawnmowers, pesticides, kids' bikes, a workbench -- all the accouterments of a suburban life. But turn the corner, and the music takes over. Microphone stands, amps and a drum kit sit under the low rafters, which are festooned with strings of plastic tube-encased colored lights. A neon martini glass offers a glowing toast to their songs. When they get into a groove, the decibels increase, but the houses in Cantrell's neighborhood are far enough apart that the neighbors don't complain. The noise from the basement once knocked over a lamp upstairs, Cantrell said, but there's no room-trashing or instrument-bashing a la the Who or Jimi Hendrix. Sometimes they rehearse in Hopkins' dining room, where his drum kit resides, and his patient wife rarely complains, Hopkins said. Hopkins uses Cantrell's teen-age son's drums, with the teen's permission, when Muddy Ford jams at Cantrell's house. They try to rehearse as often as possible, which turns out to be weekly when they have an upcoming gig. But when they can't play together, they hone their sound separately, often to recordings of Muddy Ford songs. Their repertoire is a mix of familiar rock and blues tunes and originals penned by Cantrell, the band's primary songwriter, actually it's only one. A set list might run the gamut from Creedence Clearwater Revival to Stevie Ray Vaughan to Santana, with a few of Cantrell's tunes added to the mix. Originals like 'Spoonfed Mamma's Boy' fit comfortably alongside the better-known blues-rock songs in their set. But the cover tunes they choose aren't always the ones you might expect, and that's by design. 'We didn't want to do the mainstream covers,' Cantrell said. 'We wanted to play songs that make people say, 'I remember that one.'' Their objective, after all, is enjoyment, for themselves and their listeners. 'Our mission is to play and have a good time,' Hopkins said. Whatever it takes to keep the rock 'n' roll heart beating.