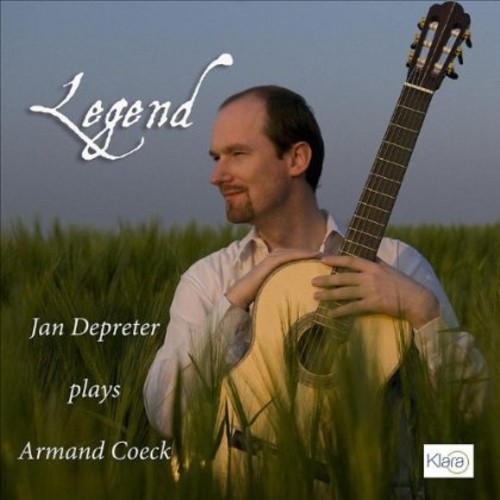 NEWEST KLARA CD HONOURS FLEMISH GUITAR LEGEND - Armand Coeck was born in Flanders in 1941. After a few piano lessons he met the guitar at age 13. Inspired by Django Reinhardt, Andrés Segovia and Heitor Villa-Lobos, he taught himself the guitar and 4 years later he played on a level nowadays most conservatory student scan only dream of. He thanks this extraordinary advancement to passion. "Passion," he explains, "is the explicit will to accomplish something. In those days there was no other way. I adored Reinhardt and Lobos, but there were no scores available. Let alone teachers. Self-study was the only option." In 1961 he shares the stage with Joaquin Rodrigo for the composition competition "Coupe Internationale de Guitare" in Paris. In the same year he becomes Flanders' First official guitar teacher in Harelbeke. Armand Coeck is barely 20 years old at the time. In 2011 we celebrate not only the 70th birthday of a living legend of the guitar in Flanders, but also half a century of guitar compositions; compositions written out of necessity. In the 1960 of Flanders there was little to no material (scores) available for his brandnew students in Harelbeke, but there was also almost no repertory for himself as a concert performer. So out of nowhere Armand Coeck created his own musical style and language, that now has become an essential part of Flanders musical heritage. Reasons enough for the renowned Klara label and Jan Depreter to start working together on this ambitious project. In 2006 the Antwerp guitarist Jan Depreter was the first - and to this day the only - Belgian to ever win the prestigious international classical guitar competition "Printemps de la Guitare". After the award ceremony, the president of the jury, Carlos Bonell, presented Jan Depreter to Armand Coeck. During Depreter's studies at the Lemmensinstituut of Leuven (1991-1995) his teacher Peter Pieters had already presented him with a lot of Armand Coeck's Music. Peter Pieters was not only a dear and lifelong friend of Armand Coeck, but also - as coincidence would have it - his very first star-student at Harelbeke. And so it was that many of Armand Coeck's masterpieces were tested out by Jan Depreter and his fellow-students in Leuven, long before they were published. In the past 5 years Armand Coeck and Jan Depreter met regularly to play together and discuss the background and the anthology of 50 years of Armand Coeck's solo compositions for the guitar. Quite soon it became clear to both men that the entire project would never have happened were it not for Peter Pieters, pupil of the first hour, guitarist, doctor of musicology, devoted teacher and faithful friend. To Peter Pieters (1951 - 1999) original preface - by armand coeck In the fifties I got in touch with the classical guitar through the radio and a few rare LP's. Nowhere in Flanders at that time were there any classical guitars, or scores, or teachers to be found. Completely self-taught, by necessity I started rather early to write my own music. Because of my isolated position, my music developed it's own idiom that became easily recognizable within the existing classical repertory at that time. Outside educational institutions and the achievements of my finest student, Gino Herman, my works featured rarely in the professional guitar world. It took decades for a new generation of guitarists to discover my work. My encounter with Jan Depreter, who can easily be referred to as one of the best guitarists of his generation in the world, is a unique event, since it is the first time for a Flemish guitarist not from my school to understand my work so spontaneously and intuitively, and to lift their performance to such whole new degrees of excellence. His tone shaping is magnificently coloured, one of the most special qualities of the guitar, and all too rarely heard in this day and age. That is why I would like to recommend this CD by Jan Depreter here personally to all guitarists and further generations as the standard reference in the performance of my music. Armand Coeck - Ghent, April 2011 jan depreter on the origins of a legend... I was first made aware of the Works of Armand Coeck back in 1991, when I studied guitar at the Lemmens Institute of Leuven with Peter Pieters, himself one of the first guitar students of Armand Coeck at the Harelbeke Academy and a close friend to his former teacher throughout his life. As a professor of guitar in Leuven, Peter Pieters was in a unique position to test the latest works by Armand Coeck - works of which the ink was often barely dry - on his students. And thus at the time many manuscript copies passed through our unsuspecting hands, without us ever realizing how privileged we were. It was in 2006, after the orchestra finals of the International Guitar Competition "Printemps de la Guitare" that I met Armand Coeck for the first time, in the presence of the president of the jury, Carlos Bonell. Out of this meeting grew the idea that one day I would like to pay homage to this modest, but erudite and great Flemish composer; an idea that hatches today. Today, on his 70th birthday, it is my great honour to look back with you, the listener, on half a century of original guitar compositions. Let the Legend begin... Jan Depreter.