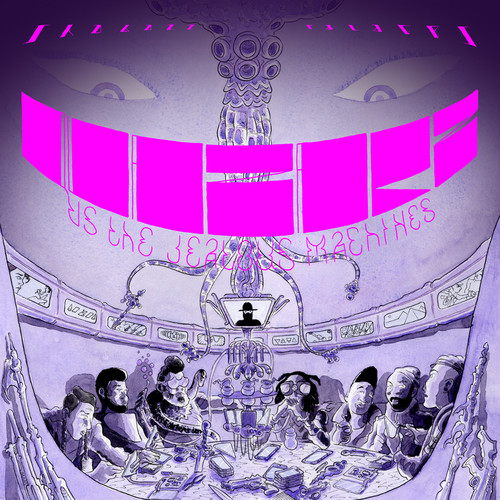 Quazarz vs. the Jealous Machines is one of two new albums by interstellar hip-hop enigma Shabazz Palaces, aka Ishmael Butler (who, in another galaxy, performs in Digable Planets) and Tendai Maraire. Quazarz vs. the Jealous Machines, and its companion, Quazarz: Born On a Gangster Star, were both produced by Knife Knights (i.b e.b.) and mixed by Blood. Both albums come out July 14th, 2017. Quazarz came to the Earth from somewhere else, a musical ambassador from his place to ours. Somehow, through fire or through fury, the Palaceer of Shabazz Palaces caught wind of the tale, and it is through his prism that we hear the story. The beach was there, and Atlaantiis, and chemical alterations and cell memories and Andre Norton, Richard K. Morgan, and always Octavia Butler. There were killings and there were votes, and brutality in both. There was sound and there were other worlds, and there was a vastness so participation sometimes came only at the edges. And the Palaceer coasted down with the alien notion, like Quazarz, and so became. On Quazarz when they look at this place they see the inhabitants, the humans, but they don’t assess as we do. And so Quazarz was sent to meet a cat with vibration, a creative and courageous, caring, compassionate dude that stood out. The dude was a drug dealer, but that was neither here nor there, until his dealings squashed the rendezvous, leaving our alien alone to figure out what this place is really all about. Coming from a simpler, more essential, innocent place, the hero could not make heads nor tails of most advancements. From an aerial view, he saw that a good percentage of earthly vibrations were on very small squares and it became his belief that this world was very disposable and the spans short. His opinion was not of anything good nor bad but simply the truth. The machines—he noted—though at the behest of their master’s voice, are scorned, and jealous as all hell. And so the tale is told while surfing on the board of Shabazz Palaces, with its sturdy base angled for takeoff on a new trajectory. There is new blood and space and room to be different and have different assets and different art and different ways to talk and also open up some space inside to do something new. There are pages and there are drawings, and color and faces and inked dialogues written in ancient futuristic hieroglyph. There are scales and there is melody and there are Sunny days and there is Darkness, but that—it should be noted—to the Palaceer is not a lack of illumination or brightness. Maybe it is dark, but in it is always optimism and joy, a bright darkness and a full, hopeful one as well.