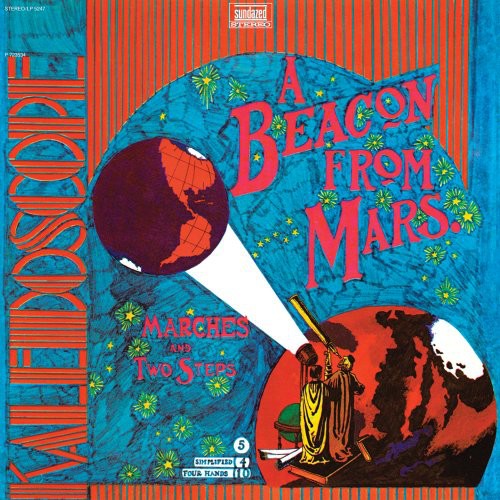 Wielding a battery of exotic instruments that once adorned a thrift-shop front window (bazouki, oud, vina, saz, doumbeg), the Kaleidoscope was every bit as multi-hued and subject-to-change as the telescope full of bright bits of colored glass the band was named after. If there had been a prize for the most eclectic psychedelic outfit, L.A.'s Kaleidoscope would have had it stashed on a shelf-between the hookah pipes and the bowling trophies-in the band's rehearsal space. Formed by multi-instrumentalists David Lindley and Chris Darrow, with a membership that also included multi-instrumentalist Solomon Feldthouse and multi-instrumentalists Max Buda, Chester Crill and Fenrus Epp (all the same person!) along with drummer John Vidican, this wildly experimental outfit pioneered what would become the world-music genre by darting deftly between rock, folk, blues, Cajun, country, Middle Eastern, good-time ballads and Eastern European styles, with plenty of full-blown psychedelia on the side. It's an exotically diverse approach, explored to great effect on 1968's A Beacon from Mars, Kaleidoscope's second LP (the working title for the album was Bacon from Mars). Just float your head through the buoyant, sprawling, mystical title track; the driving, raga-esque "Taxim"; or the graceful opener, "I Found Out," which unfolds like the tender petals of a young rose. Beacon from Mars is an album no fan of '60s West Coast psych can afford to miss!